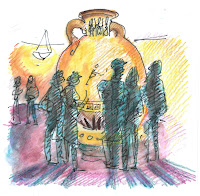 As part of the London 2012 Festival, the Royal Opera House is hosting an exhibition in conjunction with the Olympic Museum.  The exhibition briefly explains the history of the games and includes medals, torches and artefacts from famous Olympic athletes. 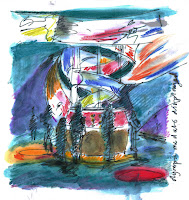 You are escorted round in groups, so I had very little time to sketch, but managed to make a few line drawings.  I added some coloured watercolour pencil later to try and show the lighting effects used to show off the exhibits. 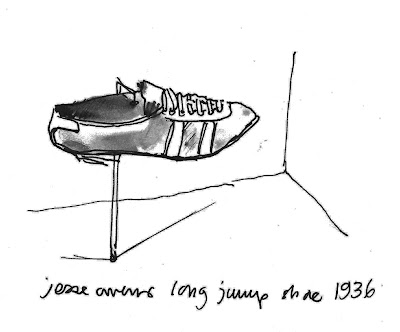 The most poignant part of the exhibition is the collection of items from the Olympic athletes, including Sir Steve Redgrave’s rowing outfit and Kelly Holmes’ running vest.  I made a quick sketch of one of Jesse Owens shoes which he wore for the Long Jump final in Berlin 1936.  It was a very moving experience – it was just a shoe – but what a story, with so much history and emotion attached.

‘The Olympic Journey – The Story of the Games’ runs until Sunday 12th August at the Royal Opera House, London.
FREE ENTRY