On Saturday, a march was organised in London to ask the government for a ‘People’s Vote’ as part of the final decision over the United Kingdom exiting the European Union. As an individual I feel quite powerless about the whole situation, so I did what I am able to do and went to record the day in drawings. Here are some of the spreads plus a video showing a better look at the accordion sketchbook which I used.

I stood near Hyde Park Corner concentrating on drawing the crowds and their banners as they streamed by for at least an hour or so, later joining the marchers as they weaved their way through the London streets to Parliament Square. I was right at the back and by the time we arrived it was almost 6 o’clock, as there were so many people involved. Estimates say there were over one million and it seemed to be very peaceful and at times had an almost festival atmosphere.

The accordion sketchbook was made with two sheets of A2 cartridge paper, partially painted with acrylic ink in blue and yellow which I thought would be appropriate for the day, similar to the one that I made in this blogpost. The soundtrack on the video was recorded on the day on my phone.

Posted by Lis Watkins at 2:44 PM No comments: 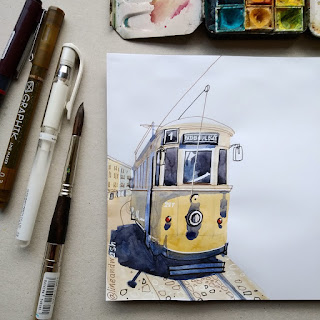 Here are photographs of some of the illustrated envelopes that I have been working on recently. I’m using them to send out samples of my work to potential clients who might be interested in commissioning me. I took inspiration from photos from trips to France, Portugal and Germany. It was lovely to go back and relive a few memories! The envelopes were inexpensive ones, C5 size, but took the pen line and watercolour wash quite well I thought. I tried to stick to drawing on the left-hand side, using only about a third of the space so that there was plenty of room for the address. 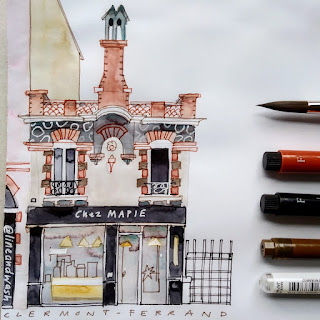 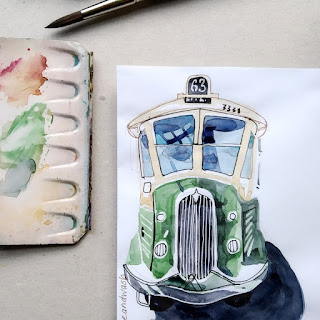 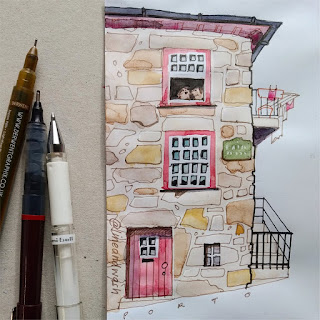 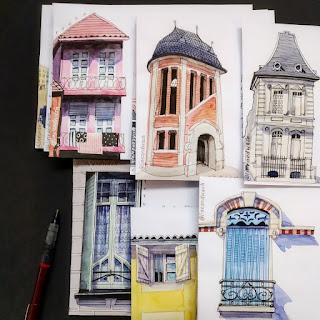 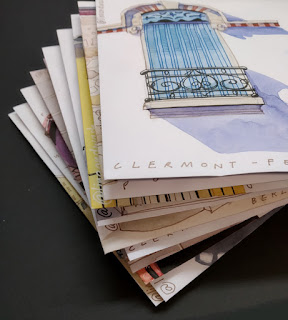 I first tried this idea last year as a way of letting existing clients know about my new website that I had just launched. That time I used good quality ones, DL size, from Paperchase. These envelopes had a sort of linen texture and also took the line and wash well. 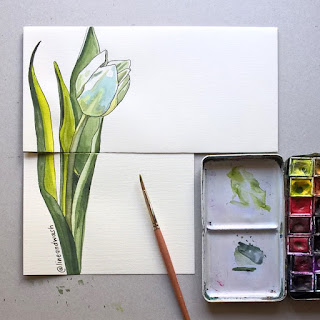 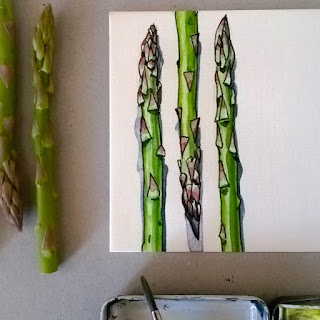 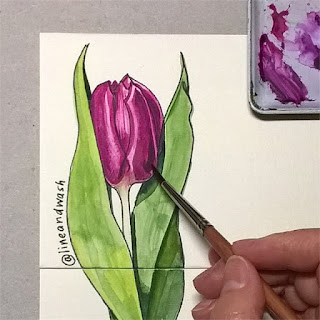 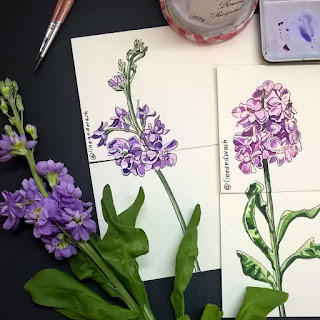 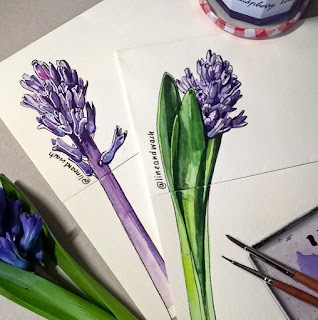 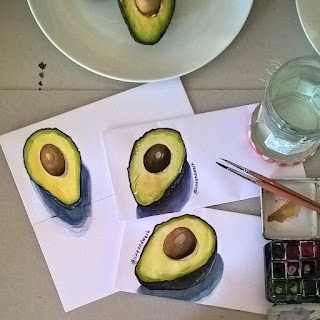 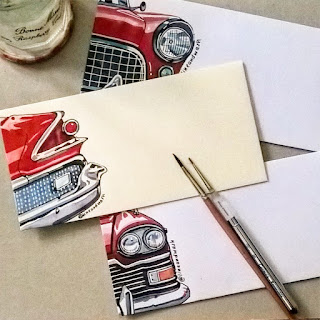 It’s something that takes a little time to do but is very enjoyable to do and hopefully is a nice surprise for the recipient!

How to make an accordion sketchbook 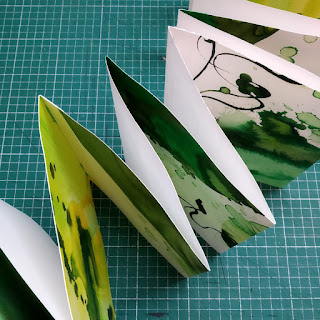 Inspired after seeing a video on YouTube by Koosje Koene from Sketchbook Skool, I set about making an accordion (or concertina) sketchbook. Here’s how I did it.

(This is the link to the video - https://www.youtube.com/watch?v=PaZkmsRcKVE and their website is at https://sketchbookskool.com)

I’d been experimenting (playing!) with Daler Rowney acrylic inks on some large sheets of paper and making marks in the studio, inspired by Instagram accounts of @emhow1, @cbarlowmarrs & @miss_magpie_spy

I used one A2 sheet of watercolour paper and one A2 of thick cartridge paper. Both were Cass Arts own brand. I cut two strips from each sheet, choosing what I thought might be the most interesting paint blobs. I then marked off a couple of centimetres (to use to stick them together with double sided tape) and divided the rest of the strip into four. Then joined all four strips together. 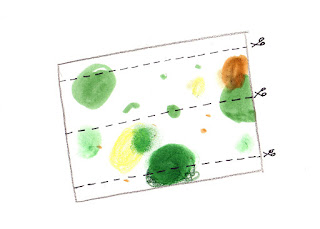 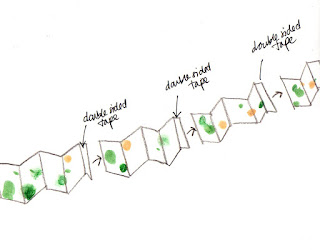 The London Urban Sketcher group were heading for a sketchcrawl at the conservatory in the Barbican Centre and the colour scheme seemed to fit, so I took it along to work in. I used white pens as well as black and really enjoyed using the sketchbook. Below are some of the results. 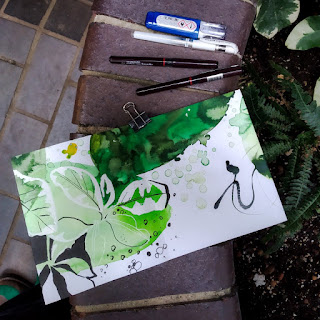 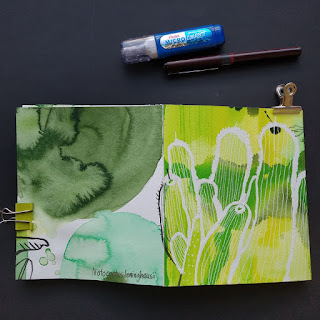 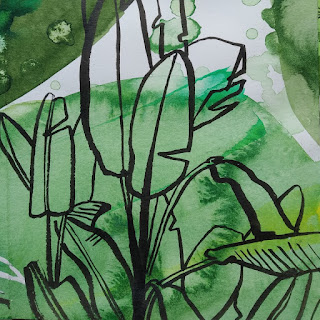 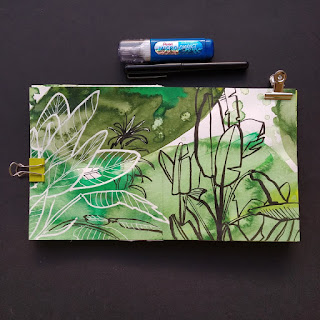 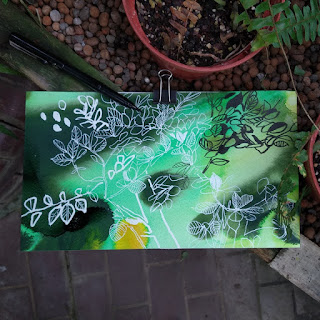 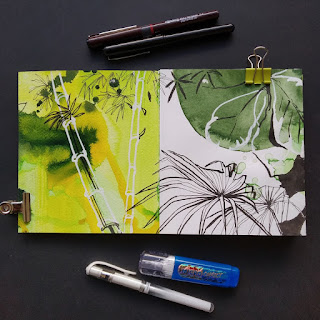 I’ve experimented since using some different colours and I think it is a technique that has lots of possibilities! 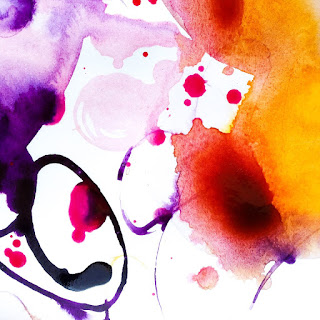 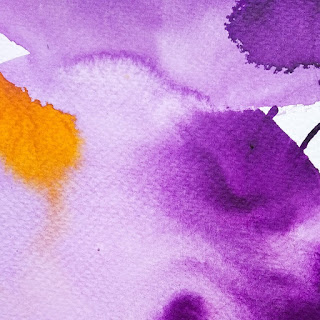 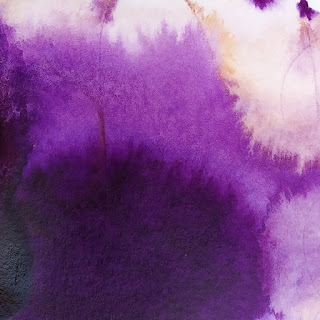 Now in it's eight year, this is my online sketchbook where I post drawings and ideas.
Please remember that all the work is covered by copyright law and you must not copy anything without written permission from me. Drop me a line at hello@lineandwash.co.uk if you have any questions.
Thank you!