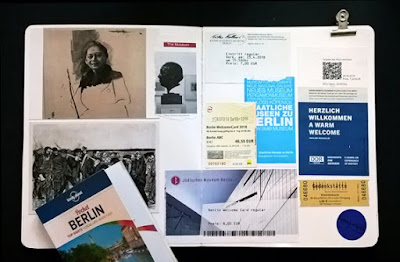 I was given a list of ‘must see’ places to visit when I went to Berlin in April. Here are photos, sketches and brief descriptions of some of them, and if you are heading there too, you might like to check them out. 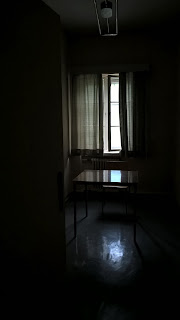 A former Stasi prison now open as a memorial. I bought a ticket for a 90 minute guided tour in English for €6. I can’t recommend it highly enough. It is a little way from the centre but easy to reach by tram. A really chilling insight into the darker side of life in the former East Germany. Many of the guides are people that were held there, so the stories are very personal and really resonate. 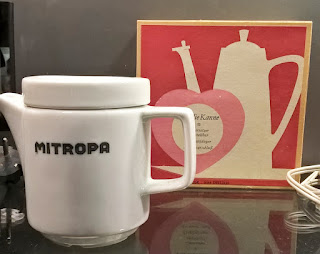 The museum is by the river opposite the Berlin Cathedral. Lots of memorabilia from East German family life which on one level seemed to be very like life in Britain in the 1970s! Quite a compact collection and very interactive, including a chance to ‘drive’ a Trabant. Information in German and English.

For me forever linked with the ‘Bourne’ movies. Shops, a main travel interchange and of course, the TV Tower looming over it.

The architecture of the building, designed by Daniel Libeskind, is stunning here. It’s like being inside a piece of art. Not to be confused with the Holocaust Memorial and Museum. 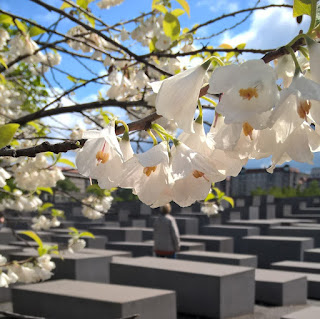 The Holocaust Memorial and Museum

The Museum is tucked away under the Memorial which was designed by Peter Eisenmann. Entrance is free but I bought an audio guide in English for €3, which I recommend. A very moving and emotional experience.

An outside gallery on the longest surviving piece of the Berlin Wall.

Big buildings. I think I missed the good bits! Nearby, the Mall of Berlin, a big shopping centre, open until 9pm, Monday to Friday with a food court on the top floor. I found it a handy place to stop off when it rained and to use the loos! 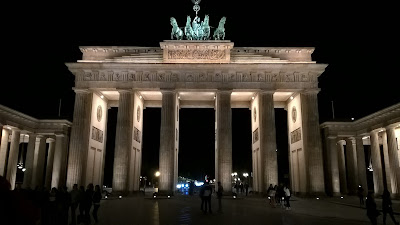 The Brandenburg Gate is impressive both during the day and at night. Checkpoint Charlie less so. The Reichtag is a huge monumental building. Unfortunately I didn’t realise that you had to book well in advance to go inside, so just seen from the outside. 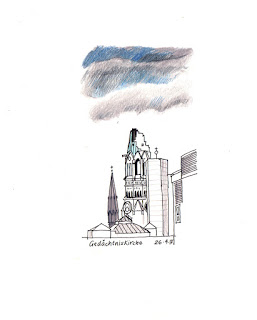 A big department store with a very swanky food court on the top floor with great views across the city. I drew the Gedächtniskirche from the window of one of the coffee shops. 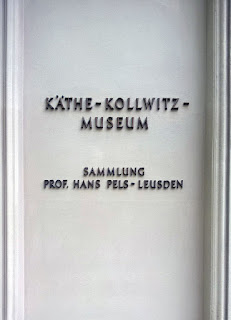 I’ve always loved Käthe Kollwitz’s work after seeing it quite a few years ago in an exhibition of German Expressionist prints. Her bold work is in black and white, mainly drawings and prints, and focuses on the themes of war and hunger. The collection is shown over several floors and also features photographs and information about her life, friends and family, in English as well as German. There are several sculptural pieces too including a life size sculpture of her head. It stands on a plinth so could stand right in front of it and look straight at her.

The museum is in a stylish old house next to the equally lovely Literaturhaus café, where I had lunch of beautifully presented veggie cannelloni in their ornate dining room. Do go! 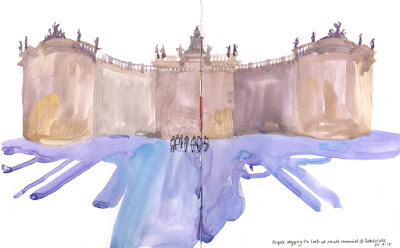 The sun was setting and the shadows were long by the time I reached here. The only place to sit was a bench placed directly opposite the Hunboldt University building so I tried to capture a little of the scene. Figures in the centre are the people who sporadically stopped to look at a small memorial in the centre of the square, reminding us that this was the site of the infamous Nazi book burning in 1933. 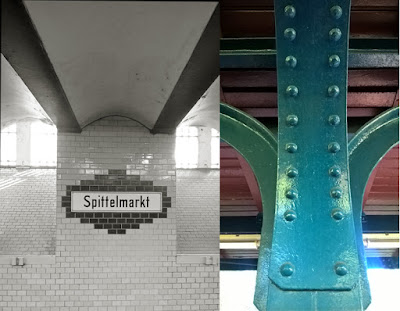 The underground system was pretty easy to navigate. I had a Berlin Welcome card which once I’d validated it, I could travel anywhere within the city. Unlike London, there are no barriers at stations which seemed to make travelling quite simple. Lots of the U-Bahn routes are overground so great views of the city too.

Lots of this! Chocolate shops too. 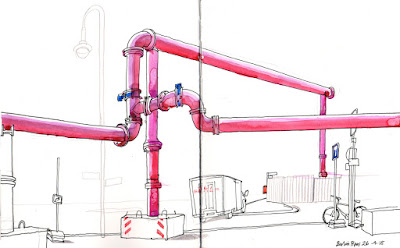 The pink pipes that I first thought were an art instillation but were in fact a way of the utility companies dealing with building work in the city. Each utility has a different colour so I saw blue and grey ones too. For some reason, I found them fascinating!