Of all the artists whose workshops I’d booked at the USk Porto Symposium, Fred Lynch was the person I knew least about. I knew he made beautiful tonal drawings and wrote knowledgeably about the history behind the places he drew but apart from that, not a lot.

It turns out Fred is actually a Professor of Illustration at Rhode Island School of Design and is the font for all illustration knowledge, which he was happy to share with the group.

This is the link to his website if you would like to see his beautiful work
https://www.fredlynch.com/ 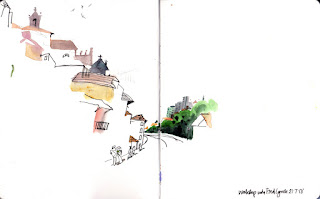 He started the workshop by asking us to finish the following sentence:

'Porto is so visually interesting because...'

I wrote '...the hills both sides of the river mean that you can see the buildings stacked up on both sides'

Then we set off to draw what we had written. Mine is above. 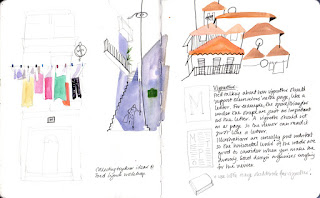 For the second exercise he read us a quote from writer Mary McCarthy:

‘Any Portuguese town looks like a bride’s finery. Something old, something new, something borrowed something blue’.

We then set off to draw 'a bunch of ideas' inspired by the text, which we would show to the group and then decide which one to pursue with. He emphasised that an illustration didn’t necessarily have to replicate what was in the text but could compliment it and add to it. 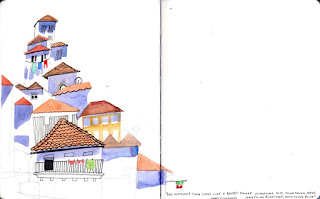 Fred was an excellent communicator and full of energy, with a great sense of humour and I really enjoyed this last workshop of the symposium.